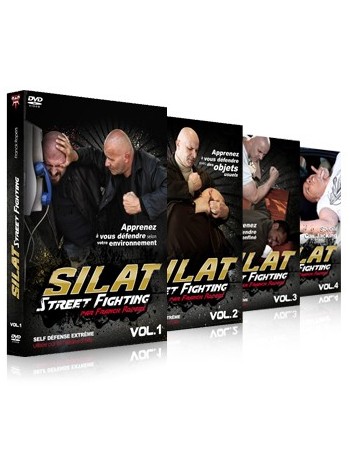 This 4 DVD collection will help you get very fast a high level in self-defense. Discover aggression patterns and see whether you could face them.

-          Discover how to prepare for conflict, use hidden guards impossible to detect and “special attacks”.

With this 4 DVD collection you will never again feel unharmed.

This is high level self defense.

Street fighting vol. 1: use your environment. Learn how to fight in an elevator, a phone booth, a staircase, a bus shelter. Also; strategies, natural weapons, stances and behavior.

Street fighting vol. 3 :  protect yourself in confined environments; defend yourself when attacks at a cash machine, in a restaurant, against a classical street tobbery or against a prepared opponent. Study how to fight multiple opponents.

Street fighting vol.4 : special car jacking: learn the strategies to protect yourself in a car park, inside a car or on a motorbike.