> SELF DEFENSE>DVD – 10 techniques to defend yourself

DVD – 10 techniques to defend yourself 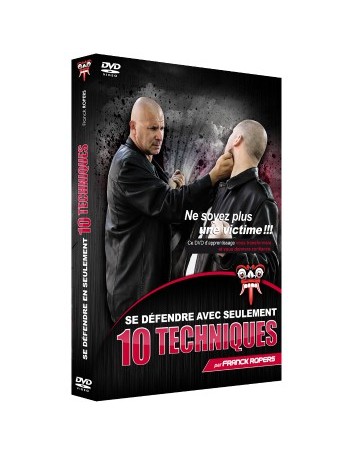 10 Penchak Silat techniques specialy adaptated to street fighting. 10 techniques chosen by Franck Ropers for their efficiency. Study this DVD and you can learn what you need to know to defend yourself in just a few hours. In just 1h30 of DVD you get vital points, striking and blocking, hidden guards and defenses against specific aggression situations.

Stop being a victim. React. Learn to defend those you love.

You don’t have the time to train amrtial arts in a gym or a dojo ?

You want to get a high level of self-defense as fast as possible ?

This DVD was made for you.

This modern self defense system was until now only available through Franck Ropers private classes. It is constantly updated with ultra-realistic tests.

You don’t need to be a black-belt, to spend every evening in a dojo or to be an athlete to defend yourself against an aggressor. Everyone can learn to defend themselves: all you need is motivation and a some focused technical knowledge.

Learn preconflict strategies and short range strikes nearly impossible to defend against. These techniques are very efficient, even when stressed out.

Learn to strike very sensitive vital points, even against oversized opponents – and use instinctive defenses that will help you survive against your opponent.

Trust yourself and become able to react fast, explosively, against an urban aggression.

-          Preparing yourself before the fight with “hidden guards”